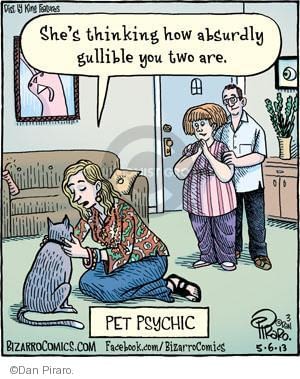 Have you heard of Sonya Fitzpatrick? She calls herself “The Pet Psychic” and has millions of followers on social media, listeners on SiriusXM radio, readers of her books, and suckers fans who attend her workshops. She is a rather famous U.K. former high-fashion model who has created a great home-based business. 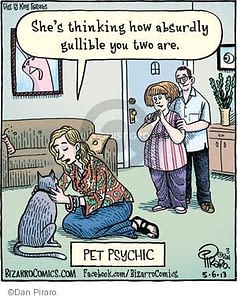 When she had her TV show on Animal Planet a few years ago, some guy brought in a kitten and Sonya was in instant communication with it. “Poor little Fluffy is feeling stressed by something,” she guesses. Then she turns to Fluffy’s owner and asks, “Is there anything in this precious little kitty’s world that is causing her anxiety?” The owner starts to weep as he tells about the two Chows that recently moved in next door and are always coming into Fluffy’s yard to “do their business.”

That’s all Sonya needed to go on for five minutes about how the two Chows terrify poor little Fluffy and that Fluffy wants to tell her owner that “something needs to be done.” Fluffy’s owner quietly sobs as Sonya returns the aloof cat to his arms. The audience wept on cue as the applause sign indicated a commercial break. If she really could do this psychic stuff, she should listen to what those Chows have to say about Fluffy. Now that would make the audience weep real tears.

Or Sonya is likely to visit a horse stall and listen pensively to a sensitive and troubled horse. She will whisper in the horse’s ear, stroke its mane, and then tell the owner the horse thinks the stall is dingy and needs something to brighten it up. I’m thinking the horse cares more about those pesky flies than having Martha Stewart re-do the place.

Where did Sonya get these “gifts”? According to her website, they started at a young age when she could feel the aches and pains of her dog, Judy. Some of Sonya’s best friends at that time were three geese her father had given her to raise. When her father killed and cooked them to serve as Christmas dinner, Sonya realized that other people did not have the same feeling for animals that she did. Traumatized by the death of her “friends,” she deliberately shut off her ability to communicate telepathically with animals for several years.

Fortunately(?) for millions of devotees, Ms. Fitzpatrick has ceased to mourn the loss of the three geese and has built a career listening to the animals. Holy cow has she made the death of those three geese pay off. Not only does she have her radio show, but she also gives seminars and writes books.

Go to her website, and you can book a one-on-one psychic reading via the phone. It will only cost you $300 for a 30-minute consultation. I suppose a

telephone interview with a gerbil is as good as a face-to-face chat, don’t you think?

Others make money in this racket. There’s an “animal communicator” in Boulder (no surprise there) who will do a reading for only $150 per half hour. I wonder if she uses Skype to enhance the communication. Don’t know.

What an awesome gig! Who on earth is going to tell Ms. Fitzpatrick or any other animal communicator that she (most of them are women) has it wrong? If a psychic tells you your turtle suffers from claustrophobia, who would argue with her? The turtle? No, he will crawl back into his shell and suffer alone while the communicator picks the pocket of another sitting duck.