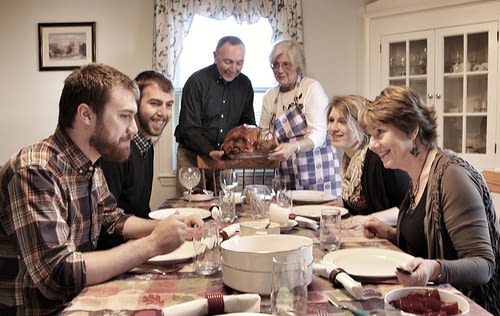 Back in the 1950s my brother and I loved going to Grandma and Grandpa’s house for Thanksgiving Day. When I was ten years old we took one of those memorable trips from Norfolk, Nebraska to Julesburg, Colorado where Grandma and Grandpa lived in a small white house just catty-corner from City Park.

On Thanksgiving Day Grandma spent most of her time in the kitchen cooking up a wonderful meal. A big brown turkey had been carefully chosen, and it was artistically basted a dozen or so times as it baked in the oven.

Aunt Bea, (yes, I really did have an Aunt Bea), brought over some beautiful sweet potatoes, and a couple of pumpkin pies. Mom set the table and served as Grandma’s back-up cook.

The men, Grandpa, Uncle Chuck, and my dad sat in the living room discussing business and the big issues of the day. They were all certain that the country was going to hell in a hand-basket, the world was near crisis, and the end times were near.

Though hungry and ever aware of the sweet aromas that wafted into the living room, those men knew better than to venture into the already over-crowded kitchen.

My brother Dick and our cousins, Ray and Darlene, played in the basement interrupting our games from time to time to run upstairs and ask, “Is dinner ready yet?”

When it was finally time to eat we all crowded around Grandma’s dinning room table that had been extended with a couple of rickety card tables, but all covered with Grandma’s finest linens and set with her best china.

Two things told all present that this was a very special day and a very special meal: One was that there was a butter knife in the butter dish, and the second was that even the children seated at the card-tables had cloth napkins.

Getting seated was always a challenge. Who was to sit where, and with whom. Only two seats were reserved: Grandpa sat at the head of the table in the only chair that had arms on it; and Grandma sat in the chair closest to the kitchen so she could dash in and get the bread rolls warming in the oven just as soon as we were done with the prayer. Cousin Ray and I, the two youngest at the meal, always had to share the piano bench because there weren’t enough chairs.

While being seated it always seemed that someone would bump the table and it shook and the water spilled all over Grandma’s linen tablecloth. But for this day, it was only a minor mishap because today was a holiday. But more than that, for our family, it was a holy day. It was Thanksgiving Day.

Once we were all seated and the spilt water wiped up, Grandpa took out his well-worn King James Bible and respectfully opened it to Psalm 100. To the three generations gathered around his table he read, “Enter into his gates with thanksgiving, and into his courts with praise; be thankful unto him, and bless his name. For the Lord is good; his mercy is everlasting; and his truth endureth to all generations.”

Then he bowed his head and prayed and thanked God for his provision, for his love for us, and for the wonderful family God had blessed him with.

DO YOU remember Thanksgiving as a kid? What are your memories? Share them, if you please!
photo credit: mgstanton via photopin cc