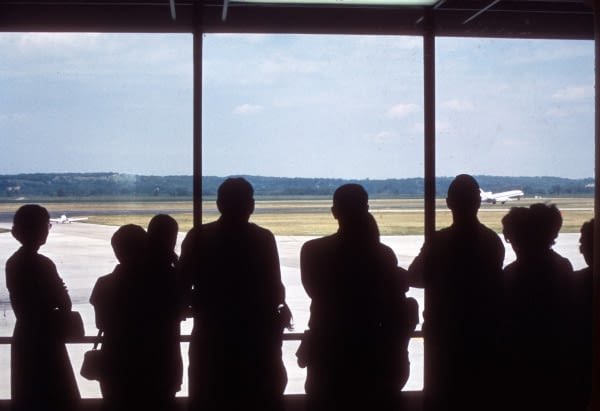 The airport departure lounge was crowded with family and friends bidding us farewell for a 3+ year commitment in Central Africa. I was only 25-years-old and had a wife and two children, had never travelled internationally and had little idea of what to expect upon our arrival in Africa. In short, I was scared.

Before we boarded our plane our parents and friends gathered in a circle to pray for us. As we walked toward our gate they formed a line so we could give them each a farewell hug. My father was the last person in line.

With tears held back he didn’t hug me. Instead he stuck out his hand to shake mine. I grasped his large, strong hand and looked into his eyes as he spoke, “Well, sonny boy, you’re on your own.” That was it. That’s all he said.

As I reflected on that moment over the years, I often thought it was a rather cold and insensitive farewell. But as I have aged, the more I reflect on his short message, the more I see his wisdom.

What he meant was that when I turned my back on my loved ones to step out of the departure lounge and on to the airplane that I could no longer talk, think or pray about going to Africa. I would actually be on my way, and all the visible, tangible, loving support groups we depended on would disappear as the airliner’s wheels would leave the pavement and the airport disappear from sight.

A few days later we were 7,000 miles from Mom and Dad, friends and relatives. I was completely and individually responsible for my family, my life, my destiny. Just like Dad said, I was on my own. The biggest change was that my life was mine, I was proceeding forward. I had accepted responsibility.

Dreaming, brainstorming and planning are exhilarating as ideas are investigated, profits are projected, or influence is imagined. But until you proceed forward toward a goal, nothing real, nothing lasting, nothing quantifiable happens.

The greatest danger of the thinking/planning stages of your life is that you can get quite comfortable talking to yourself and everyone else about what you are going to do next week, next month, or whenever the time seems right, without ever taking one step into your goals.

Four years ago I briefly met a guy who was finishing up his senior year at Colorado State University. Recently I bumped into his wife and so I asked what her husband was doing since he got his degree. “He’s back in graduate school!” she said with a sigh. “I don’t know if he will ever stop going to school!” It is possible the guy has gotten comfortable taking classes but is scared to death to take responsibility for applying his education in the real world.

What about you? Is it time for you to stop talking and planning and praying and start doing? When you take that first real step forward something significant will happen to you: you will immediately be responsible for your own life. You will step into your own success. You will move toward your destiny. You will be “on your own, sonny boy,” and you will grow to love it.