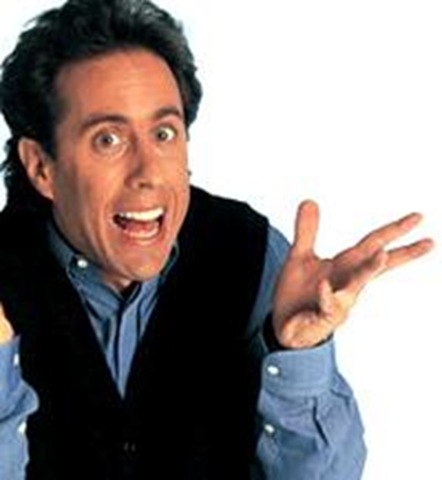 Before anyone had ever heard of him, Jerry Seinfeld walked on stage at a comedy club, looked out at the audience and froze with fear. He was eventually booed and jeered off the stage.

Have you failed at something really big?  Maybe your business went broke or a marriage failed. Perhaps you took an important test and failed it with flying colors.

When you fail at something, it’s common to hunker down, to disappear from the scene until the shame of you failure fades. You need some time to lick your wounds, clean up the mess, and get over the humiliation of it all.

But once you’ve had your cry, once you’ve bandaged your wounds and forgiven yourself and others, what do you do to get yourself back on your feet and on the road to success?

Suggestion number one: Reject the label of failure. Just because your business failed or you didn’t pass the test doesn’t make you a failure. Here’s why: because failure is an event, not a person. Do you see the difference between admitting you have failed at something and declaring, “I am a failure?” Failure is something that happens, not something you are. So reject the label of “failure.” Thomas Edison, the world’s greatest inventor, refused to accept that ignominious label. In reference to the many experiments he undertook to invent a workable light bulb filament he said, “I have not failed. I’ve just found 10,000 ways that won’t work.”

My second suggestion is: Learn the right lessons from the event. Failure doesn’t happen only to you, it happens to everyone. If you attempt anything significant in life you will experience failure. The difference between people is how they perceive their failures. Do they view them as dead ends or do they see them as learning experiences? Are they stumbling blocks or steppingstones?

I am convinced that far too often we review and relive our mistakes without learning anything from them. Do not rehearse over and over again your failures. Do not wallow in your stupidity or bad luck without ever asking, “What did I learn?”  Your first-class failure may hold the key to your ultimate success. If you don’t learn from your failures, you fail twice.

My third suggestion is: Start over, but start smarter. Henry Ford said, “Failure is only the opportunity to begin again more intelligently.” I don’t care how many bad choices you have made in your life, you are much, much smarter than you give yourself credit for. So take what you’ve learned from your failures and put them to work on your next project, and get started soon. The sooner you move beyond your failures to start work on your future, the sooner you will succeed.

If you’re breathing, if you have a pulse, then you have failed at something and you’ve probably failed often. What could possibly go right when you fail? The possibilities are unlimited if you reject the label of failure, learn the right lessons, and start over, but start smarter.

When you fail, don’t let your failure break you. Let Jerry Seinfeld be your role model and let your failures make you. Let folks know you’re here and you’re smart and you’re ready to go again! And as you do, take comfort in these words by Robert Kennedy, “Only those who dare to fail greatly can ever achieve greatly.”

StumbleUpon
Tagged on: failure, How to handle failure, jerry seinfeld