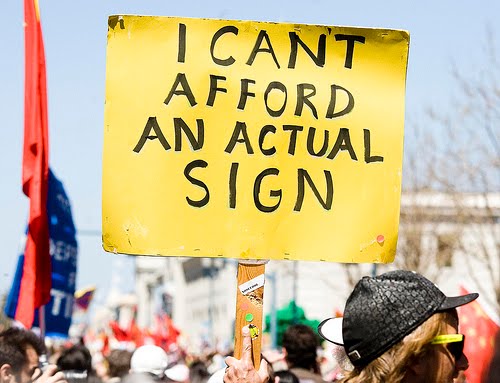 You’ve heard the lecture about America being the most prosperous country in the world, right? Me too, but if that’s true (and it is) why is it that so many people struggle to eke out a living? Think about it: If you were to ask ten people at random “do you feel prosperous?” what do you think they would say?

Most would say something like, “Are you kidding? I’m barely able to get by.  I survive but I have nothing extra, nothing excessive, just barely enough.”

Where does this sense of lack come from given we live in the midst of such prosperity?

Three possible sources: You follow a bad script, you ignore opportunities and you prepare for nothing. Let’s take them one at a time:

First, you may be following a bad script. Somewhere, sometime in your life someone gave you a bad script to follow and you did. It might have been a generational script (curse) that says, “Our kind of people never achieve much.” Or, “We’ve always been poor and that’s the way it is.” The message is clear, just getting by was the way it happened for generations past and getting by is how it will be in the future.

Second, you ignore opportunities. Some people think that people who take advantage of opportunities and find success are only lucky. While it’s true for a small number of cases, like the guy who wins the lottery, in most cases opportunities are discovered by those who look for them. Those content with just getting by are not in the hunt so they don’t get any.

Third, you prepare for nothing. You finished high school and maybe a few semesters of college, but after that you quit learning, stopped growing. According to www.statisticbrain.com, 33% of high school graduates will never read a book after they graduate and 80% of U.S. families did not buy a book last year. What’s the title of the last book you read? What is the nature of the last self-improvement project you initiated for yourself? Preparation precedes progress. No preparation, no progress.

So, what to do about your sense of lack:

First, write your own script – only this time make yourself the hero not the villain, the victor not the victim, the achiever not the defeatist. Deny the generational curse of mediocrity and declare yourself a person worthy of more, much more than you’ve settled for thus far.

Second, seek opportunities. No longer wait for the world to come to you, go out and get the world you want. There are more opportunities out there than you can imagine. If you take advantage, you’ll get advantage. And, as humorist Milton Berle advised, “If opportunity doesn’t knock, build a door.”

Third, prepare. Benjamin Franklin said it best, “By failing to prepare, you are preparing to fail.” If you do nothing else in the next week, read a book. Your local library has thousands of volumes awaiting your eager mind. Preparation precedes any significant achievement. And be patient, preparation takes time. Think how long a sprinter prepares for a race intended to last only minutes or seconds.